What do Interactive TV, Family Fun, and Military Intelligence have in common? 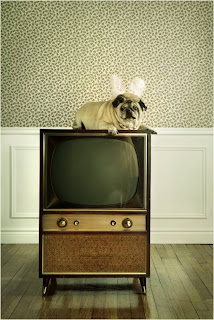 There is a thread within interactive TV literature and commentary, holding that new technologies will cause the TV viewing experience to evolve from "lean back" to "lean forward", as TV melds with digital social and interactive technologies. For example, Swedlow writes that “television is now becoming an on-demand, participatory, non-linear, infotainment, advertising targeted, broadband, two-way communications platform” [1]. Lu writes: “As viewers become accustomed to the “lean forward” (active) model of viewing instead of the traditional “lean back” (passive) model, as well as to the habit of processing more information simultaneously (e.g., using computers or mobile devices while watching television), they are beginning to gain and demand more control over their viewing experiences than ever before ." [2,  see also 3]. These views seem to reflect a predisposition to the new technologies, and perhaps a lack of appreciation for the evolved sophistication of traditional TV.

Traditional television allows viewers to be passively engaged. They can sing along with a performer or talk back to a presenter. They can be surprised while retaining control. They can have new experiences without being threatened. They can be taken out of their own lives …while leaning back. The current state of the medium, reflecting more than 50 years of evolution driven by consumer demand, should  be taken as an indicator that “lean-back” is an essential part of what audiences seek in the TV experience [see 4, 5, 6].

To succeed, new social and interactive forms of TV must allow users to participate while doing absolutely nothing. It's a contradiction, but so are Jumbo Shrimp, and they work out just fine.

Enthusiastic readers can find the full argument in an academic-style article I published on Television's Job-To-Be-Done.

6.         Van den Broeck, W., J. Pierson, and C. Pauwels, Does interactive television imply new uses? A Flemish case study, in EuroiTV’04. Proceedings of the Second European Conference on Interactive TV. 2004: Brighton, UK.
If your interests include theory and philosophy, please check out my other blog.